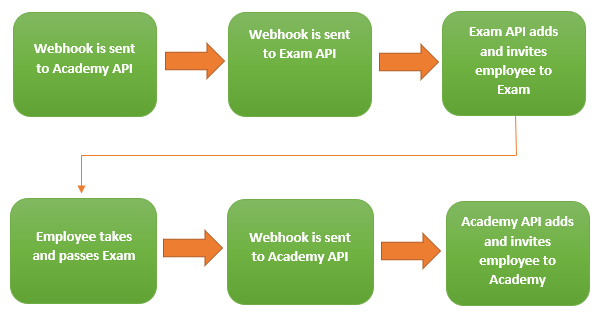 Example 2 - Sending invitations from your own systemA customer wants to use our tool for training his (new) employees. They currently use the A predefined group of participants setting to send invitation emails. However, many employees perceive these invitations as spam, and some of these emails also end up in their spam folders. The customer wants to send these invitations from their own system instead. The customer first creates a webhook that sends a payload to the Exam API - add participant without notifying. When a new employee is added to your system, the webhook sends the payload to the Exam API which adds the employee. The API call does not send an invitation to this employee. When the API call is successful, the response includes login credentials. These login credentials must then be sent to the employee from your own system and mail application. This also works for existing employees, you just need to create a webhook that sends a payload to the Exam API which triggers the action of adding participants without notifying to the Exam. The login credentials returned in the response of the API call can then be sent from your own system. Example 3 - Selling ExamsA customer creates Exams in our system and sells them to his own clients from their e-commerce website. He wants to automate this after his clients pay for an Exam. To automate his sales process he will need to use a webhook. When his clients purchase or pay for an Exam on his e-commerce website, they are added to his system. The webhook he creates must be triggered after they have paid. This webhook will then send the relevant payload to the Exam API call and must return either a(n) success or error response. If it's a successful response, the API call adds and invites his clients to the Exam they paid for.

5. What are the API call specifications?Our API accepts application/x-www-form-urlencoded or multipart/form-data and json. Find out more in the following articles:API calls for Exams and AcademyAPI call for CoursesDelete participant API

Was this article helpful?